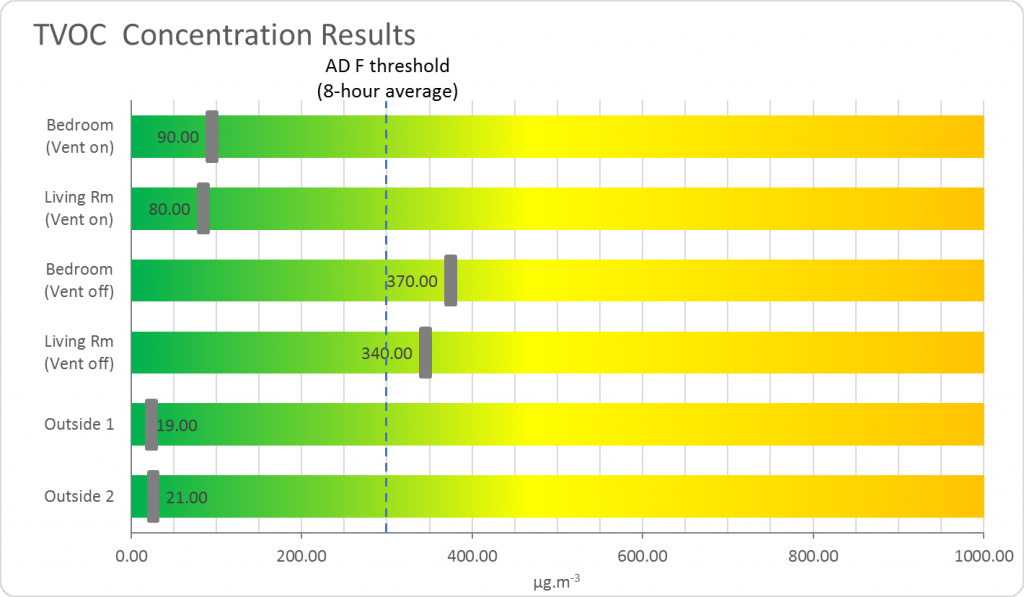 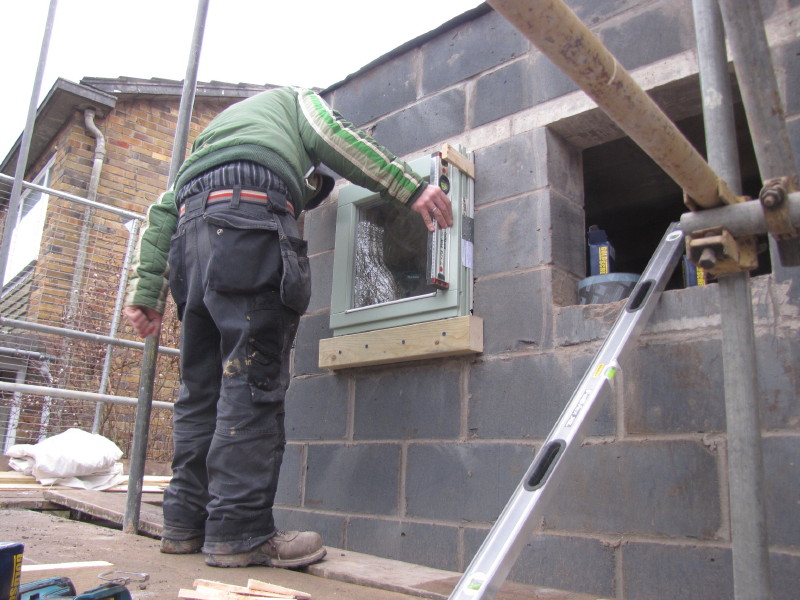 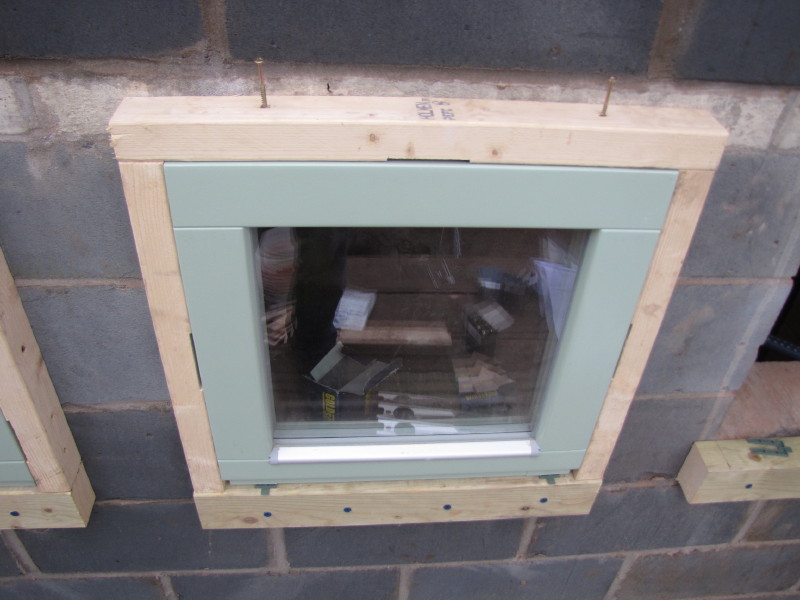 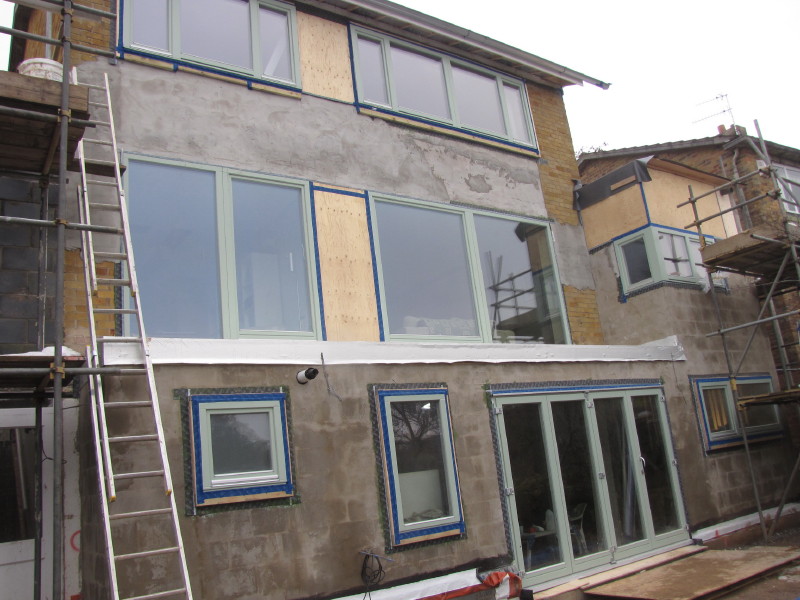 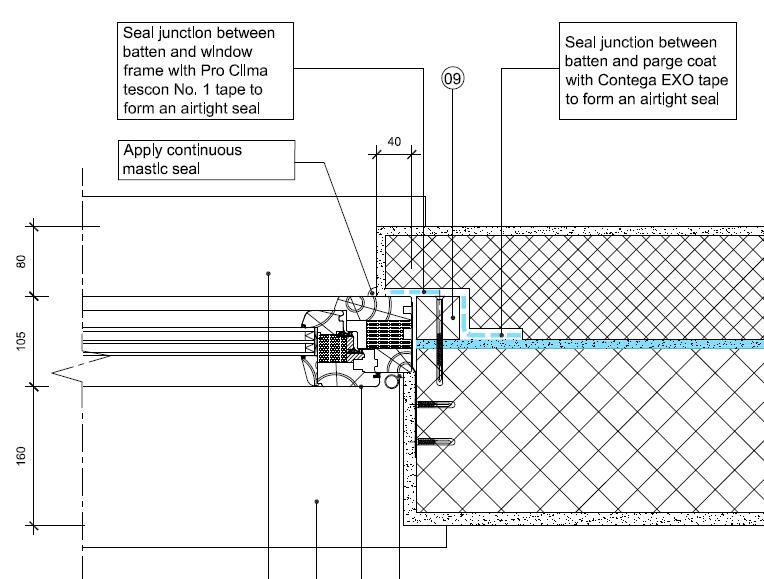 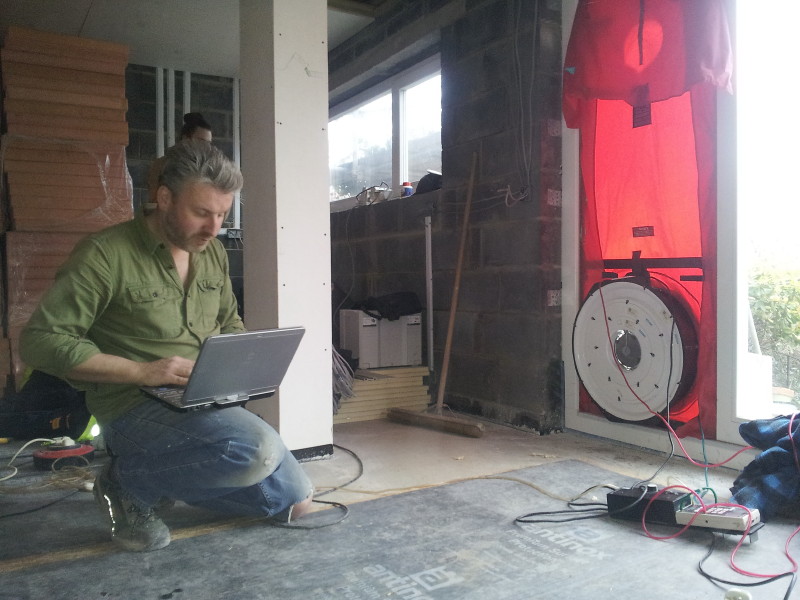 I carried out the first air leakage pre-test this week. Our target for the extension area is 1.5 m³.h/m². The primary air barrier on this project is on the outside of the masonry, i.e. just behind the external wall insulation, which will be applied shortly. So, we decide to do an initial test to see if there are underlying issues prior to covering everything up. 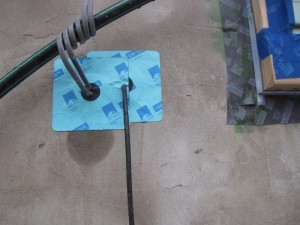 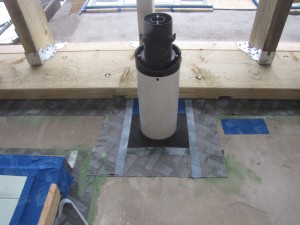 The base render coat acts as the main air barrier, so anything coming through this must be sealed. Cables and the boiler flue are provided with grommets, providing a good seal around these penetrations. The windows have been sealed with tape (see earlier post) around the outside, but the internal sealing hasn’t been done yet.

So to the result… we get a pretty good 2.7 m³.h/m². Leakage detection identifies a significant amount of leakage around the internal openings to the existing house, which were temporarily sealed, so this needs improvement prior to the next test. There is a small amount of leakage around the windows, due mostly to the incompleteness of the inner seal, and a little through the drains (not filled with water yet). Also, our secondary air barrier, internal plaster, hasn’t been done yet. But all in all this isn’t bad, and believe we’re on track for meeting our target of 1.5 m³.h/m². 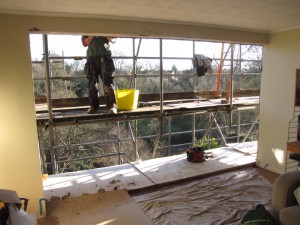 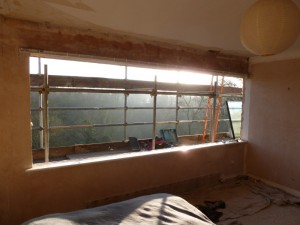 At last, the new triple-glazed windows are being fitted. The old windows are removed, temporarily exposing the house to the elements. A timber frame surround is constructed around the structural opening as we are moving the new windows forward of the existing elevation. This is to allow them to be installed within the external insulation layer, thereby reducing thermal bridges. 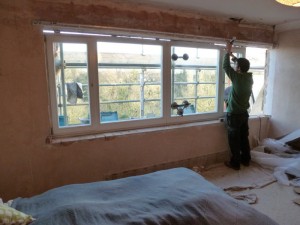 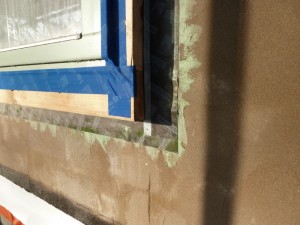 The windows are fixed into the new surrounds and then taped to form the air seal using Tescon tape. The timber surround is taped to the masonry wall using Contega EXO tape and Orcon F sealant. However, because a lot of this work has happened in between wet and cold weather, adhesion has not been optimum. We have therefore taken the additional precaution of applying a second render base coat on top of the Contega tape. 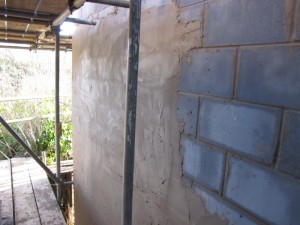 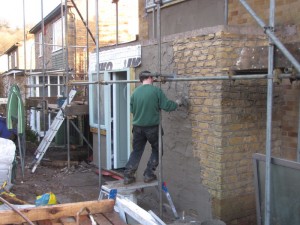 The base render, or slurry coat to the existing walls and extension walls has now commenced. As well as providing a smooth substrate for the external wall insulation, this render coat also serves as our primary air barrier, highighted in blue in the section below. 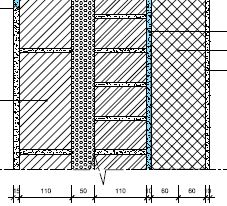 Working between sub-zero temperatures (before Christmas) and the rain, the rendering is still ongoing, but having done the front of the property, our house is starting to take on a different look… 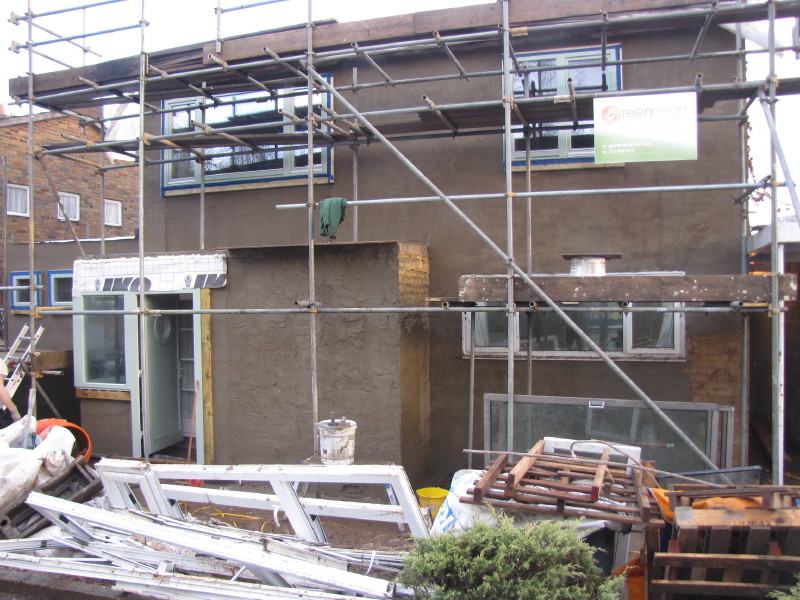 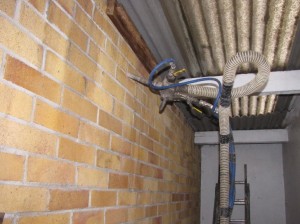 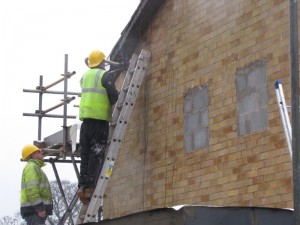 We have selected Platinum Ecobead as the CWI insulant. These are expanded polystyrene spheres that are injected at high pressure into the cavity – the manufacturer’s claim this totally fills the cavity, which is good. It is also blown with an adhesive, which means that the beads will stay in place, and not slump, when it dries. As we are replacing the windows and sills, a few days after the CWI installation, we get a unique opportunity to look inside the cavity to see how well the Ecobead has filled it. I am impressed! 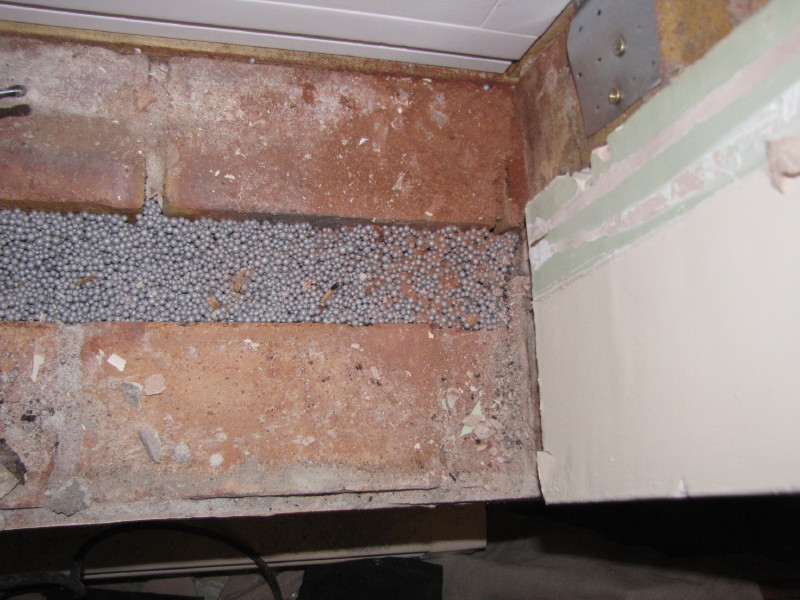 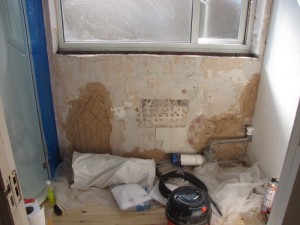 The toilet has come out, freeing up the remaining floor for re-boarding and the window wall for the rest of the re-plastering. Around the soil and vent pipe (shown) there were huge holes through the inner leaf brick wall, measuring approximately 350 x 150mm – a very significant air leakage path (sorry no photo). Bathrooms and kitchens are key culprit areas for air leakage, particularly over the years as trade plumber after trade plumber make alterations for new appliances, sanitaryware, etc. It is always worthwhile looking for air leakage paths and dealing with them before the new installation goes in. In this case, the hole was infilled with masonry and mortar and plastered over. END_OF_DOCUMENT_TOKEN_TO_BE_REPLACED 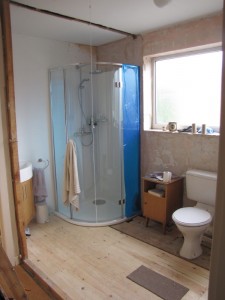 The first phase of floorboards are in along with the new corner vanity unit. The door needs to be relocated to suit the new bath position. The existing partition wall between bathroom and landing is demolished, ready for the new stud wall and door position. This gives further opportunities to do more air leakage sealing around the wall frame. 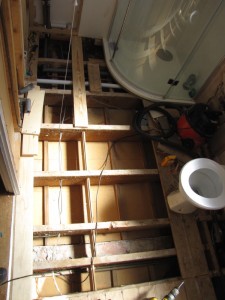 Well, the shower is in and working, but now the work continues around it. Probably not the most practical solution, but this is the reality of working in an area that needs to be kept in use. The floorboards have come up as the originals were in poor repair. Also, there was a strip in the floorboards where the original partition was. END_OF_DOCUMENT_TOKEN_TO_BE_REPLACED 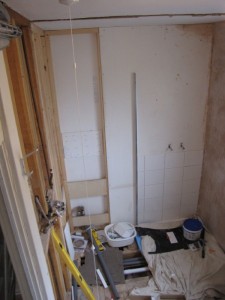 Have got a bit carried away with building the bathroom  over the last few weeks and haven’t done such a good job of recording progress. The bathroom has been extended as the top photo shows (looking toward new wall). END_OF_DOCUMENT_TOKEN_TO_BE_REPLACED