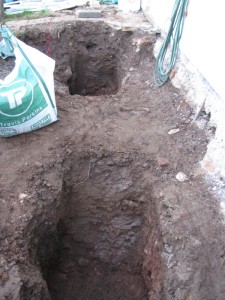 Yes, the rain came this week. 79mm fell here in 24 hours (Monday morning being the worst) – just perfect, absolutely perfect conditions to do anything other than dig the foundings for the new foundations! So, it has been slippy and sticky on site, which has meant slow progress. So not a huge amount to write about this week.

Not to despair, the guys have progressed as well as can be expected and have got the foundings prepared and ready for the first inspection  by Building Control tomorrow (Friday). The concrete delivery is booked for the afternoon, immediately after the inspection sign off. So, all being well the foundations for the rear wall will be cast tomorrow. This is good as we’re expecting a dryish weekend before poor weather resumes next week.

In an attempt to minimise the amount of concrete in our extra deep (1.2m) foundations (see earlier posts related to Wessex Water requirements), the design adopted uses 750 dia concrete pipes as opposed to a massive trench fill to this depth. The top photo of this entry shows 2 of the 4 foundings for these pipes. On top of these pipes will sit large lintels which we will build the walls off. Our contractor has sourced some off-cuts of 750dia ventilation ducts (photo below) which will be perfect for casting the foundations. 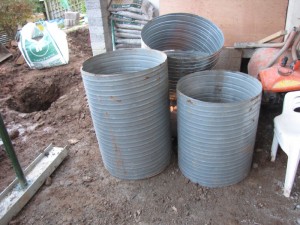 In the meantime, the underpinning has continued this week and the rear wall is now fully underpinned. This has gone well, but there’s more to be done as we work our way up the slope of the house. The photo below shows the, recently poured, underpinning section with the formwork and bracing (granted not the most interesting picture, but I am a bit short of visuals this week!). 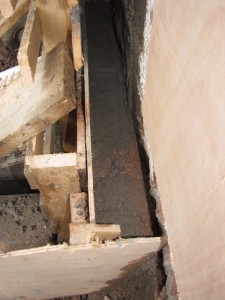 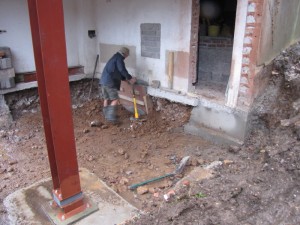 After the slab is removed and the earth excavated to the right level, the underpinning of the walls can commence. The photo above shows the first corner section of underpinning complete. Each section is approximately 1200mm long and is cast in alternate sequences. The photo shows the form-work for the second section being removed, the third and fourth sections (either side of the second) can be cast in one sequence, as per the structural engineer’s details. 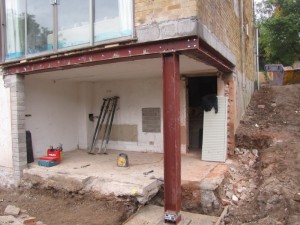 The picture shows the extent of the steel work now that the scaffolding has been removed. Toward the base of the new steel column, you can just make out the thermal break. The new insulated floor level is approximately 30mm above this break, and so the existing needs to come out.

Concerned that a breaker drill will cause too much vibration (and noise), it is decided that a concrete saw would be best. This will cut the slab into chunks of manageable size for the digger to ‘scoop out’. 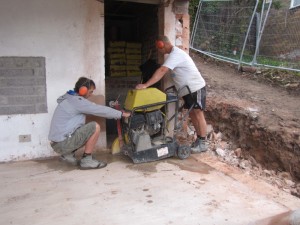 The photo above shows the saw in use. It takes best part of the day to cut the slab, but it is a success and the slab is removed. Beneath the slab is solid, rocky, undisturbed ground. The digger scoops out around 650mm of earth beneath the slab. This reveals the base of the back and side walls, ready for the under pinning. See next update 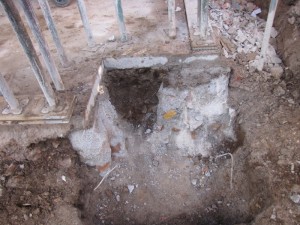 Well, first of all the base for the column needs to be prepared. Digging down around 1 metre below the existing ground slab and cutting through the existing and substantial foundations.

This new base will take the load of the whole corner of the house and needs to be pretty substantial. Our structural engineer specifies a depth of 400mm, but we decide to take it deeper to almost 600mm to get below the level of the existing foundations. 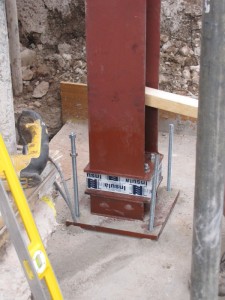 And so once the base is cast, the new post arrive s(late again!). The picture above shows it sitting on the new concrete base, which has been drilled and injected with the chemical resin anchor (as used for the horizontal steels). 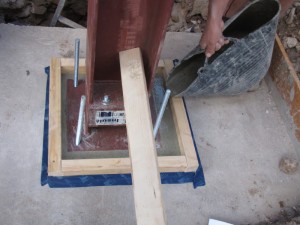 Finally, the column base is shuttered and then grouted with structural grout (as shown in the photo above). It will be bolted on Monday and the Acros will be struck. A project milestone and time for a quick glass of bubbly stuff before the guys go home for the weekend. They’ve done me proud, and I can relax a little having some proper structure beneath us again!

Whilst the house is temporarily supported, the horizontal steels arrive late, but the guys hang back to get the first section installed. The main span across the rear of the property goes in the next day. It takes three of us just to move the 200kg length, which is eventually teased into place and bolted to the shorter steel on the side wall as shown in the photo.

Using Hilti chemical anchor fixings, the web of the steel is fixed to the side of the slab along both steel sections as shown by the bolts sticking through the web (yet to be cut back).

Next, the concrete pad for the column needs to be prepared. 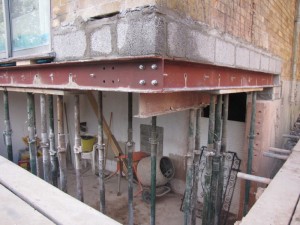 The masonry above the steel is reinstated using block work, allowing the Strongboys down the side of the house to be removed. The Acros beneath the slab are rearranged, one-by one to support the newly installed steels – the weight of the slab now being transferred to the new steels. This allows the corner section of the existing wall to be demolished and the ground slab to be removed as will be shown in the next update… 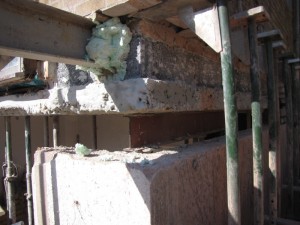 In addition to the Acros and Strongboys, a further steel ‘needle’ was inserted to the external corner and another steel placed beneath the slab to spread the point load. After a few more checks and tightening up of the supports, the concrete lintel beneath the slab was cut out and the side wall partially demolished, exposing the edge of the slab in readiness for the steels.

The picture below, taken a little earlier in the week, shows the side wall slab in good condition: 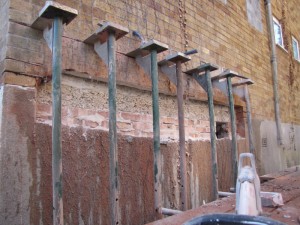 The same can’t be said for the rear part of the slab, which has softened from water and salt damage over the years. As the picture below shows, part of the slab edge has broken away: 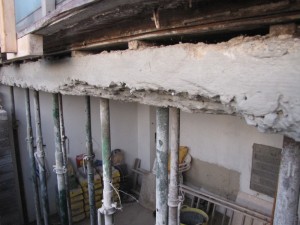 As we are relying on this edge (structurally: the slab sits into the web of the steel), we need to strengthen it using Sika Armocrete repair mortar. As a further precautionary measure, the bottom flange of the steel will be extended by 100mm to make sure it reaches sound concrete beyond the edge. 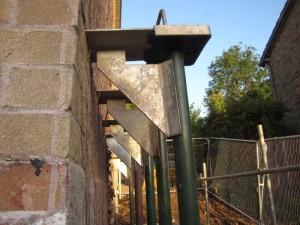 Scaffolding went up on Tuesday followed by the installation of an array of Strongboy supports and Acro props in preparation for the demolition of the side wall and removal of the concrete lintel at the rear, which supports the slab above the former loggia. 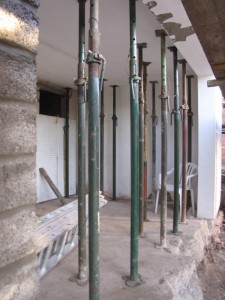 The picture above shows the matrix of Acro supports. The concrete lintel being removed (with white render coat) is just visible at the top right of the picture.

Now ready for some serious demolition! 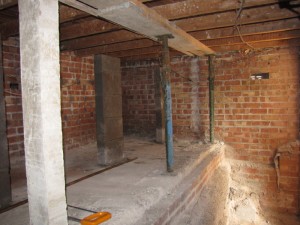 There is a vast void beneath the house, thanks to the slope that the house is built on. In its present state, it cannot be effectively used due to the amount of structural walls and supports. Some of these are now being demolished and replaced with lintels on block piers. The photo above shows the block piers constructed on top of the existing retaining wall. Elsewhere, access hatches are being cut into the walls as can be seen in the photo below. 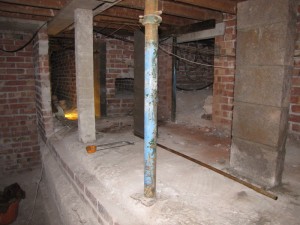 Opening up under the house in this way allows the space to be used more effectively. The part of the void in the photos (with the greatest headroom) will be part of the heated volume of the house and will become a plant room for the hot water cylinder and an archive/storage area to house items currently in the loft. The loft will be almost unusable for storage due to the amount of insulation proposed and its low (22°) pitch.

The void will also enable good access for installing the new services: pipes, cables, ducts, and will be excellent for getting the floor insulation into the unheated part of the void toward the front of the house where it becomes more of a crawl space. The drawing extract below shows the extent of the void and the delineation between heated and unheated areas (insulation and air barrier line shown in green). 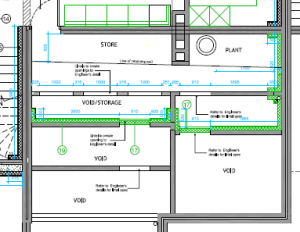 In meeting the structural engineer, it was agreed that the lower ground slab should stay for the time being as it will be easier to temporarily prop the upper slab from this. In the meantime we have been deciding the best approach for the main structural alterations and the insertion of the steels. 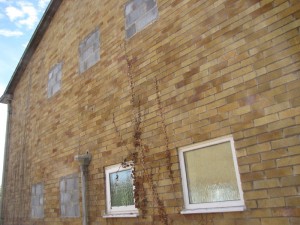 First of, five of the seven side windows have been in-filled, the remaining two will come out later. In-filling the windows will strengthen the wall prior to the demolition of the lower section of this wall. 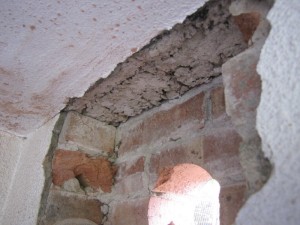 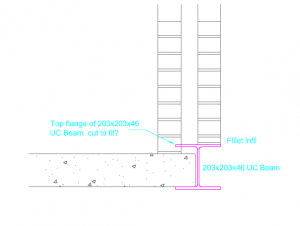 Exposing the slab edge reveals that it is supported entirely by the inner brick leaf. This makes the sequencing simpler as the slab can be supported as proposed, with an array of Acro supports below. The outer brick leaf will need supporting independently, but there is not as much load to contend with as we thought. As the sketch detail above right shows, we have a slight clash with the proposed steel now and we will need to trim the top flange such that it doesn’t foul the inner brick leaf. Our structural engineer is okay with this providing we bolt the web of the steel to the edge of the concrete slab.