Our house was built in 1962 on the perimeter of Blaise Castle Estate, a Grade II* registered park and garden in Bristol. It is built into a steep slope, and is within the boundary of the Kings Weston and Trym Valley Conservation Area. There were two main storeys, with living room, dining room and kitchen accommodation on the ground floor and four bedrooms and bathroom at first floor. A utility room and store were located on the lower ground floor and a further room (formerly a loggia, which had been enclosed with large windows) was mostly used for storage. We saw the opportunity to make more of this space and turn it into the kitchen and dining room. 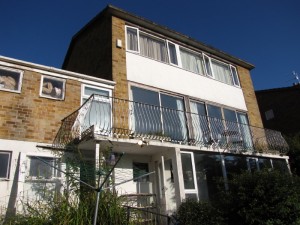 The house is one of four houses built at the same time on our street and had only one previous owner. The construction is traditional masonry with brick-cavity-brick construction. The roof is low pitch with concrete tiles and the floor is part timber suspended and part cast concrete above the lower ground rooms. Prior to the work, a concrete balcony spanned the width of the house at the rear. In about 2005, the previous owner had the majority of the windows replaced with standard uPVC double glazed units and the boiler and hot water cylinder were replaced in 2008. Other than that, the house was in original condition when we bought it in 2010.

At the time the house was built, there were no specific requirements for insulating buildings – the national Building Regulations as we know them only came into being in 1965. The original floors and walls in the house were completely uninsulated and the loft had only a 50mm layer of mineral fibre, which was in very poor state. The house also had a large amount of thermal bridges, which was quite typical for a house from this era, as much concrete was used. The concrete thermal bridges included: the gutters along both of the eaves elevations – Finlock type; the external stairs giving the only access to the lower ground floor and garden; and a balcony to the rear that extended from the living room floor slab. Tackling these thermal bridges was at the core of the challenge for improving the thermal performance of the house.