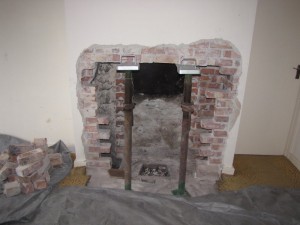 Whole bricks are removed, including the original lintel. The remaining bricks on the ‘tooth’ edge will be cut back. Recommend that this is done with a cutting disc to prevent brick damage, but it will be very dusty! 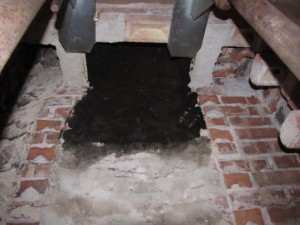 The inside of the chimney revealed a known and an unknown problem. We knew the chimney was a twin chimney, serving both the fireplace and the flue for the original boiler on the lower floor (long since removed). The flue gases would have travelled up the separate compartment of the chimney and you can make out this in the photo above: the left of the image above shows the second compartment, with the main chimney, blackened by soot, in the middle.

What we didn’t know was that there was a third compartment as can be seen on the right of the photo. This was not a chimney, simply a void, but it had been infilled with the original builder’s rubble, which was unsupported, and potentially dangerous. With a bit of persuasion with the chisel drill, the fist few bits of rubble were loosened. Not much longer after, the whole lot came down on its own. 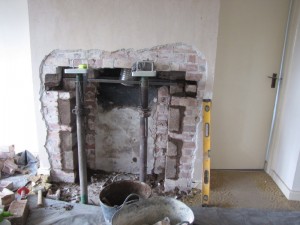 With the bricks neatly cut, new masonry blocks are inserted to make the return walls for new opening. At around this point, our new flue liner is installed (from roof level) and it can just be seen at the top of the new opening. 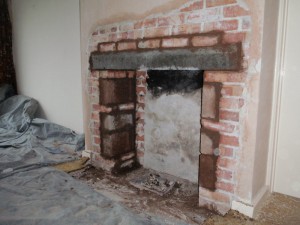 Finally, the lintel is installed and surrounding masonry is tidied and pointed. Structural works now complete. On with the finishes next.

6 thoughts on “the chimney opening is enlarged”